Quality wine begins in the vineyard, and our vineyards are a constant source of pride, worry and inspiration. We farm 21 varieties on nearly 300 acres, making ours one of the largest vineyards in Temecula. Our vineyard team keeps us up to date on the latest viticulture techniques and works hard to make sure our grapes thrive year after year so we can deliver the wines our guests love.

Care of the vineyard is year round. Our team adheres to meticulous practices through the seasons to ensure the vines produce the highest quality fruit they can. Visit the winery during different seasons to see the incredible changes the vineyard goes through. 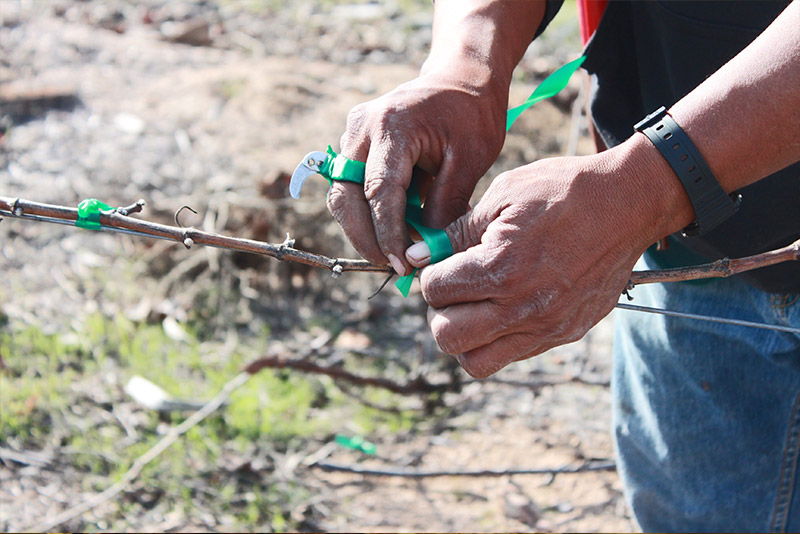 Balance is essential in pruning. Pruning is the act of cutting last year’s canes to leave a predetermined number of fruiting buds on the vine, which takes place between January and mid-February. 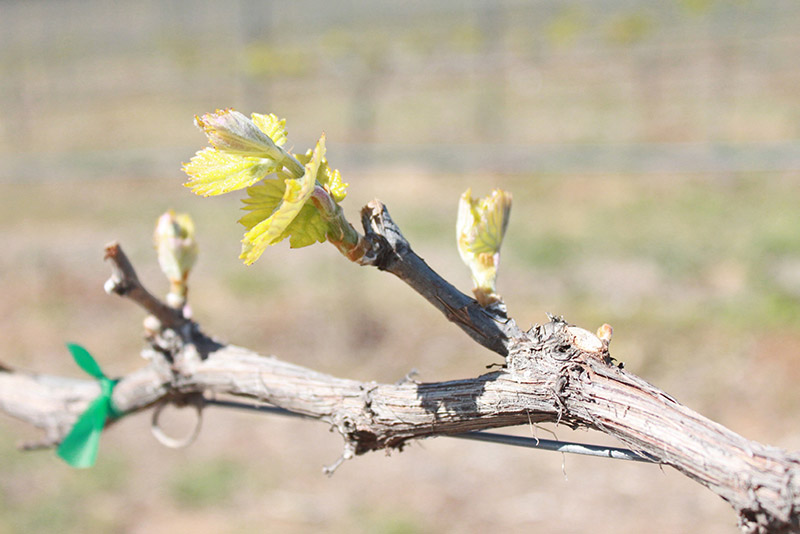 Buds are the small part of the vine that rest between the vine’s stem and the leaf stem. Bud break in California occurs in the month of March, when tiny buds on the vine start to swell and eventually, shoots grow from the buds. 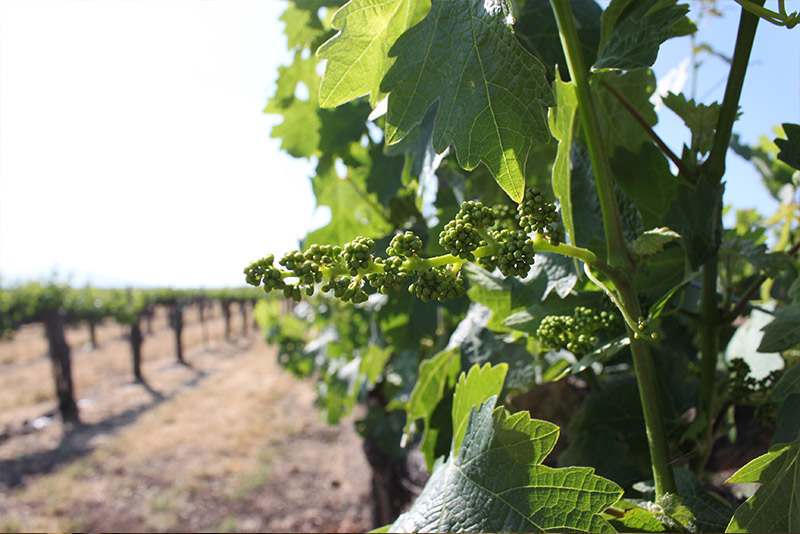 Following bud break, in April the buds become the new season’s canes and flowers. Each flower cluster will become a bunch of grapes. 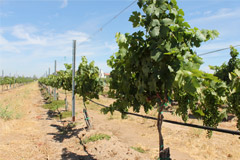 In late April, the flower begins to develop a seed and grape berry to protect the seed. This stage is critical to wine production as it determines the potential crop yield. 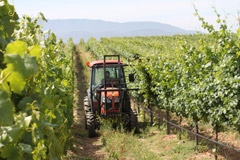 Hedging is like a green pruning. Once the canopy of the vines grows past the top wire in late spring to early summer, we give them a “hair cut”, and just like a hair cut allows healthier hair growth, hedging allows the vines to grow a better canopy for better photosynthesis and better fruit. 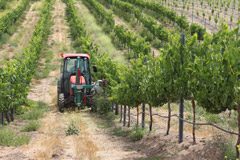 Leaf pulling is conducted in the summer months with our Clemens De-Leafer. By pulling leaves, we allow air, light and disease control products to penetrate the canopy and reach the clusters. For our red varietals, we de-leaf on the “morning side” of the rows to add more polyphenols to the grapes, which strategically helps the color and structure of the wine. 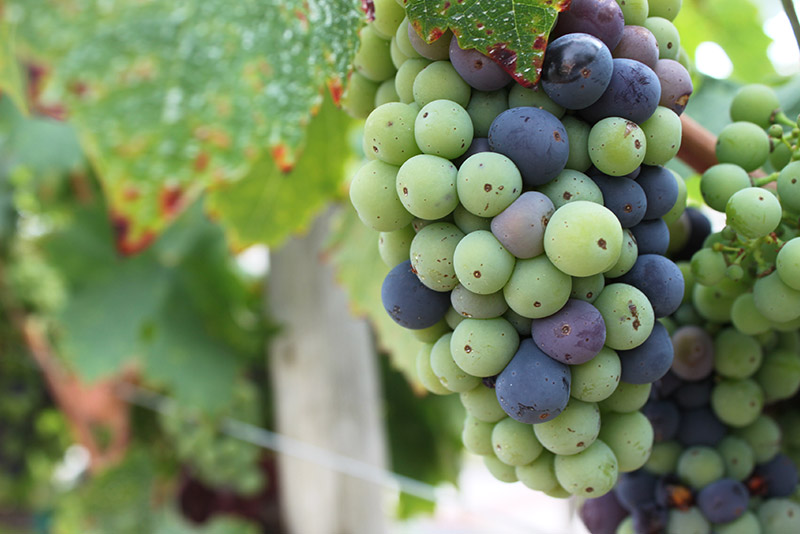 Veraison occurs about 40-50 days after the fruit has set, typically in late June, early July, which begins the fruit ripening process. The grapes begin to change from green to red/black or yellow/green depending on the variety. 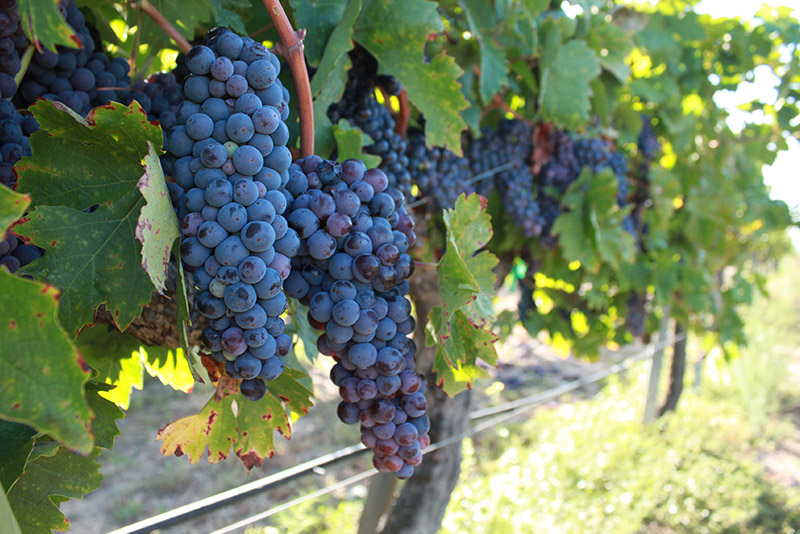 The grapes reach maturity from August to October, which is the completion of the ripening process of the grapes on the vine. What constitutes the exact ripeness varies depending on the style of wine being produced, and what the winemaker considers optimal flavors. 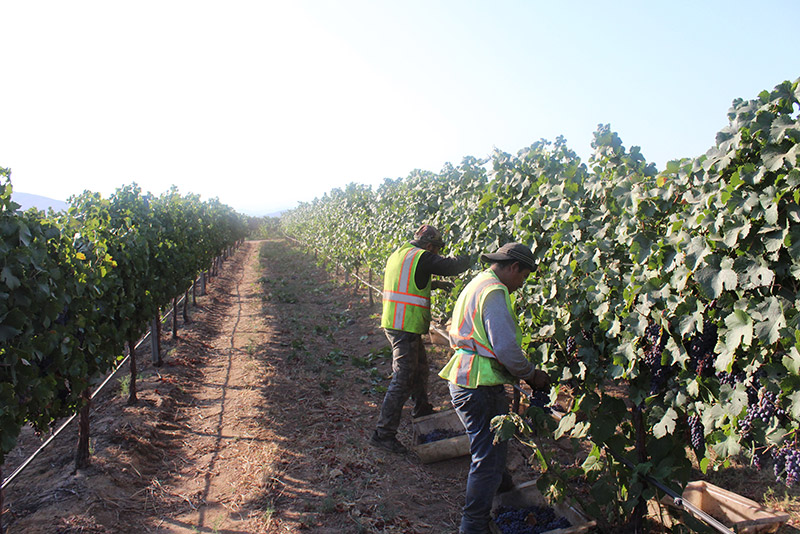 Harvest is one of the most crucial steps in the winemaking process, and is determined primarily by the ripeness of the grape. In California, harvest typically occurs between August and November. 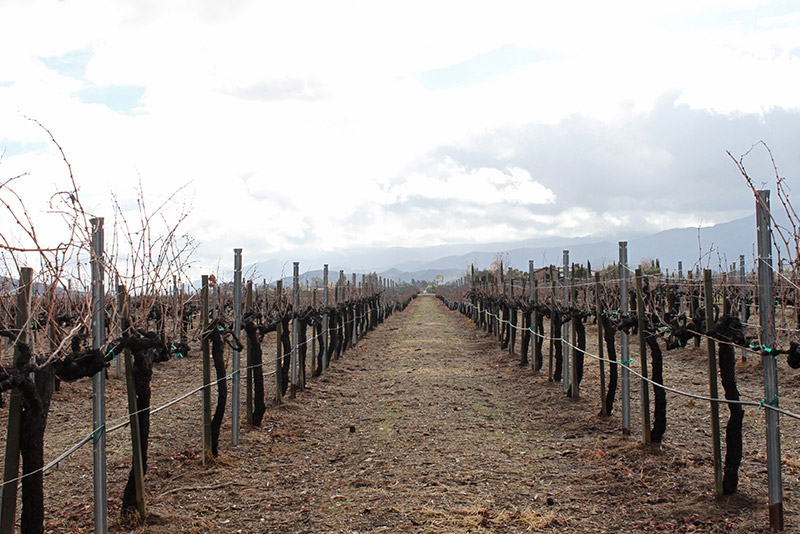 After harvest, the vine enters a period of dormancy in late November. Reacting to the cold weather, the vine changes colors and it drops its leaves. At the end of this phase, the vine is pruned and trained so that it can yield a better crop the following season.

It is obvious that you need great grapes to make excellent wine, but you also need proper equipment and a team of experienced winemakers. Modern, Italian-made equipment & close attention to detail are two necessities of winemaking here at Ponte. 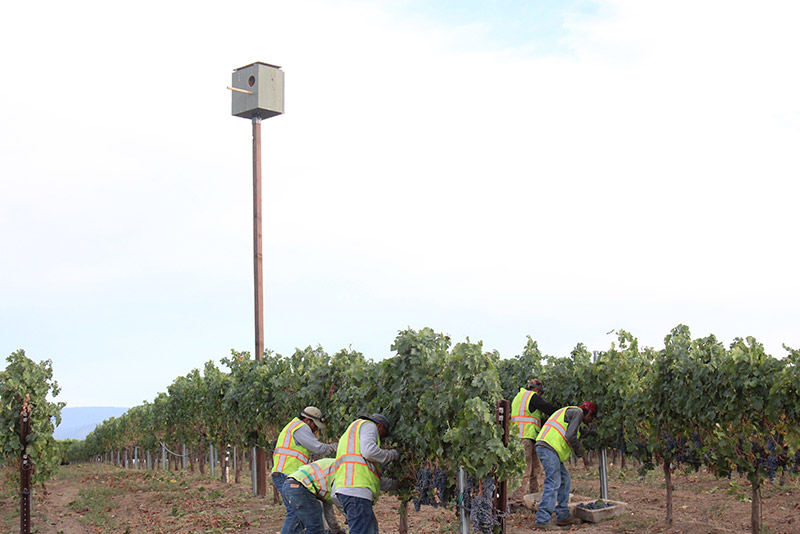 The first step in any winemaking process, harvest takes place when the sugar levels in the wine are just right. We harvest a majority of our vineyard by machine, and reserve picking by hand for specific varietals that require it. 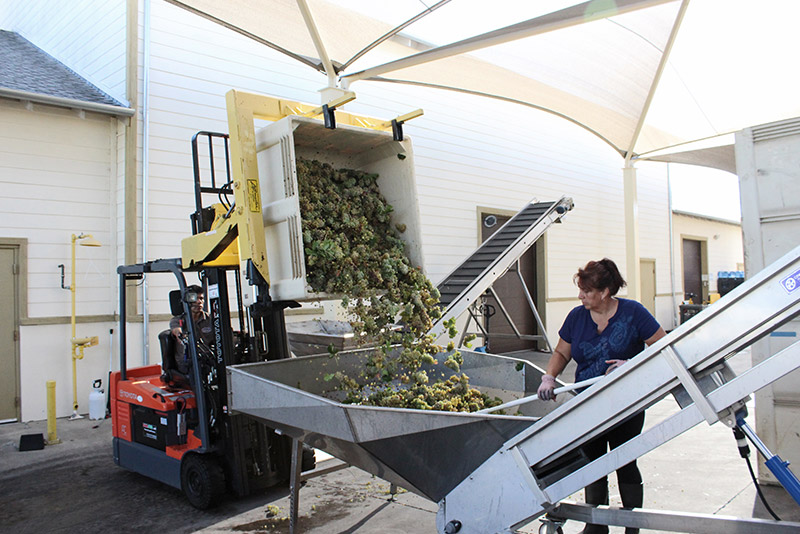 After hand-sorting to remove leaves, most harvested grapes go through the destemming process. We use a machine that removes the berries from the stems, then passes them though a crusher. 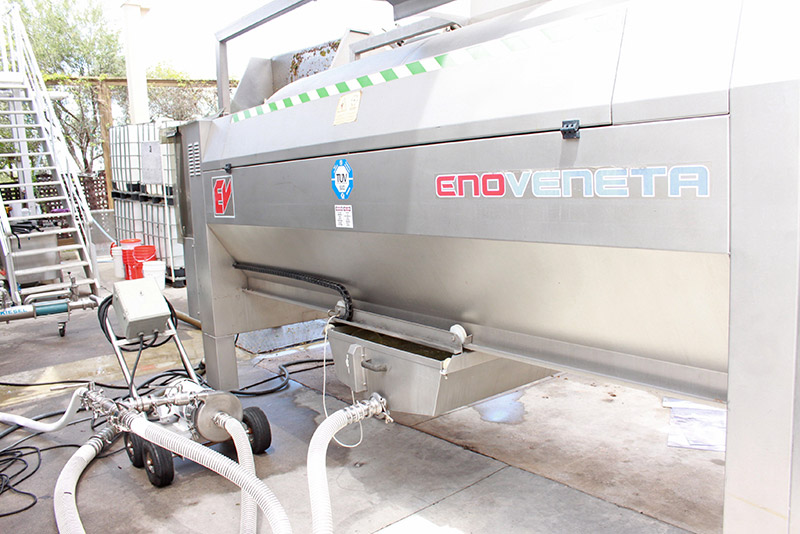 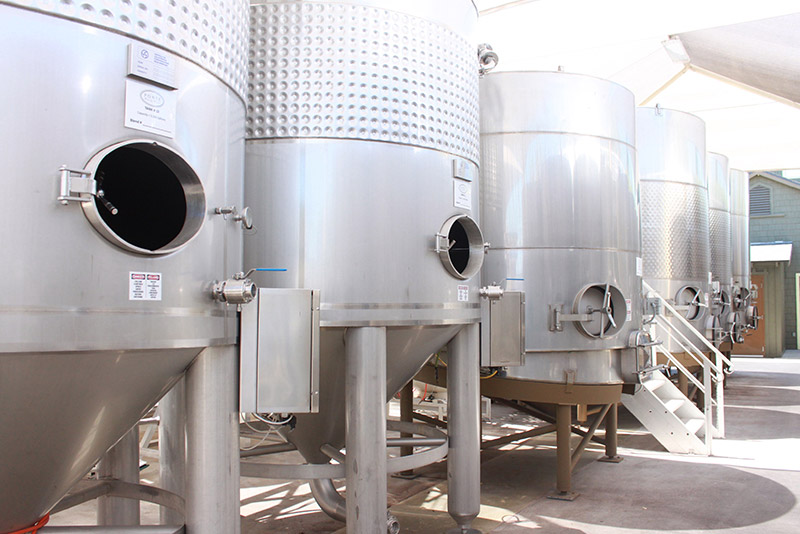 Fermentation is the process in which sugars are converted to alcohol, and occurs in our large stainless steel tanks. The insulted steel tanks have a cooling jacket to ensure a constant temperature during this process. White wines remain in the tanks to await bottling while our red wines typically spend 1-4 weeks in the tanks before being transferred to age in oak barrels. 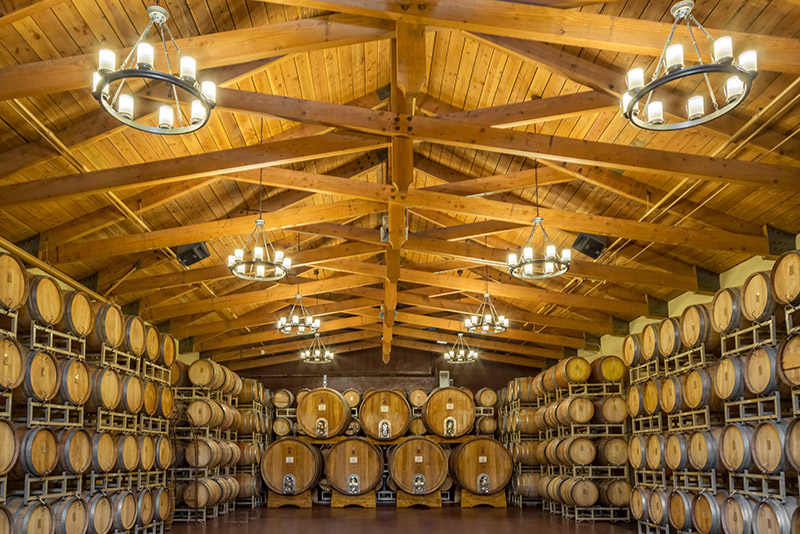 For aging our red wines, and to briefly ferment a few of our white wines, we use oak barrels from France, Hungary and the United States. Oak barrel aging can have a profound effect on the resulting color, flavor, tannin profile and texture of the wine. We typically use our barrels for approximately 3 to 5 years before recycling them, or using them for aging our Port. Our red wines may spend up to 2 years in the barrels before bottling. 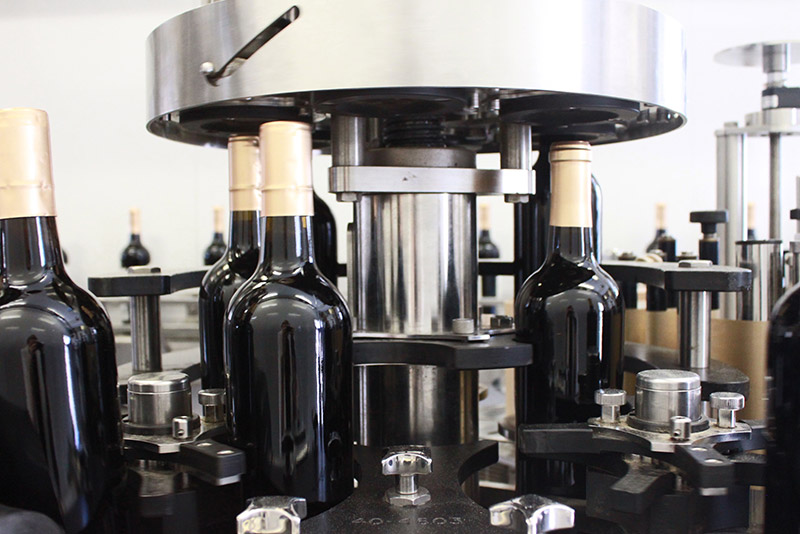 After our wines have been aged to perfection in the tank or barrel, we bottle them on-site. Just like every other step of our winemaking process, we pay close attention to cleanliness so the natural flavors are preserved. The bottles are filled, corked, capsuled and labeled right here on property. The process of grape to glass is complete, and a new bottle of Ponte wine is ready to be enjoyed!